So it's upgrade time for a buddy of mine - he's in test pilot mode and I've been along for the ride.

Initially the top of his list was the Street Triple R - sounds familiar - I was convinced after the Kwaka my next bike was going to be a StripleR.

Like me, my buddy decided the StripleR is a very nice motorcycle which handles and goes well, but it lacks soul. Too much pentium processor, not enough "Do it again.....I dare ya!"

So the StripleR was stripped from the list, in the interim he asked if he could take the Shiver for a blat, I said sure - no chance he'll buy anything else now. He loved the Shiv, her agile frame, natural ergos and the way the V-Twin pulls with satisfying torque, not to mention with the Akras she definitely barks!

The next bike was something quite interesting - I had to ride it myself too, it was a 2013 BMW F800R 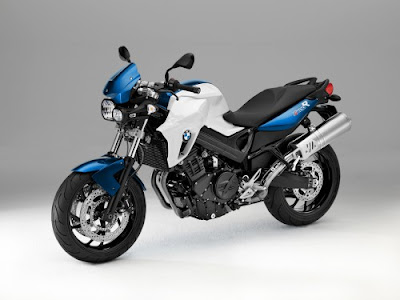 What an insipid bike. I didn't realise it was possible to make something which looks the goods go down the road like a bus.

Don't get me wrong - it has some good points: Factory heated handgrips, under tail fuel tank, ABS, touring pack etc - but meh - if the bike doesn't encourage you to ride what's the point?

The parallel Twin 798cc motor is very smooth and linear, but it lacks urgency and punch. There is no surge, no arm pulling power - unlike the Shiver can produce in Sport mode and a quick crack of the throttle - snapping the throttle on the Beemer just made the bike-bus move faster, all in a very agreeable way. Boring....

It did handle well, the brakes were good, instruments were easy to read and the switchgear felt great, but like the StripleR this thing has no character other than a polarising front end; very love/hate.

During the test ride, when I was astride the Beemer, my buddy was re-riding the Ape. We pulled over to swap back and I asked him which he preferred, the grin on his face was an answer enough. The Shiver!

Looks like there will be another Ape on the road soon......

Thanks for the German validation BMW. You make nice things.
But you can't inspire me to ride like an Italian can.....