But alas, it's Saturday morning and I have a small window of time to smash out some blog pieces - so here goes.

Sunday 9th of March 2014 was the annual Chocolate Run to the Mt. Franklin Chocolate Mill. This ride is traditionally a fundraiser ride for someone/something within the community.

In the past we've raised money to send an Athlete to the Para Commonwealth Games, donated to families who've had rider down, rider out situations and needed all the help they can get, to this year's run - raising money for the Black Dog Ride for mental health......... a worthy cause indeed and a great excuse to hit the hills with some old riding friends........woot woot.....

We had a good turn-out this year with approximately 40 riders - no larger than last year, in fact maybe slightly smaller......no matter - just ensures the tempo is kept a little higher and ample throttle is the name of the game. 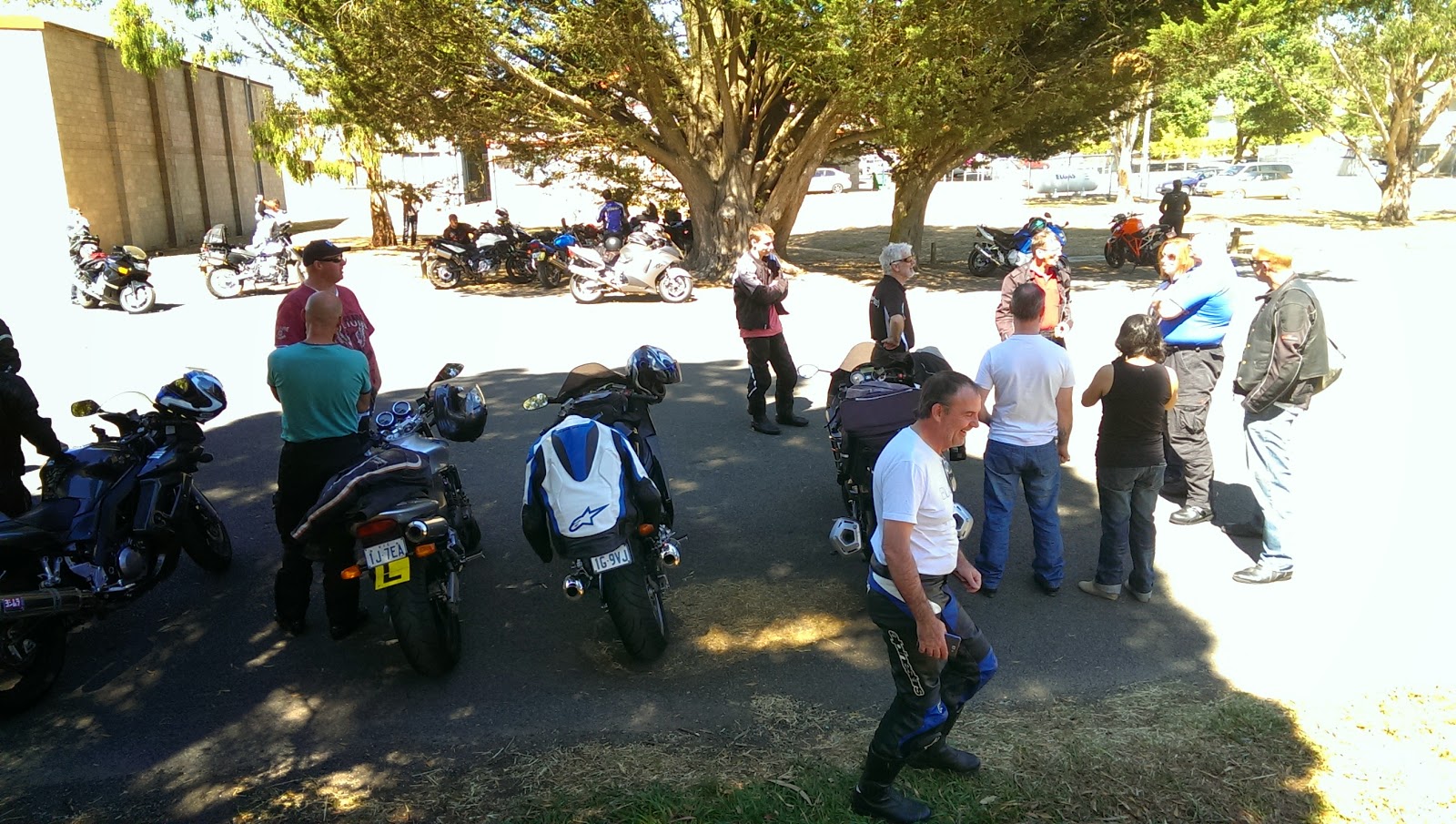 We met off the freeway out west of Melbourne and pointed the bikes north.......get that first boring slab out of the way. 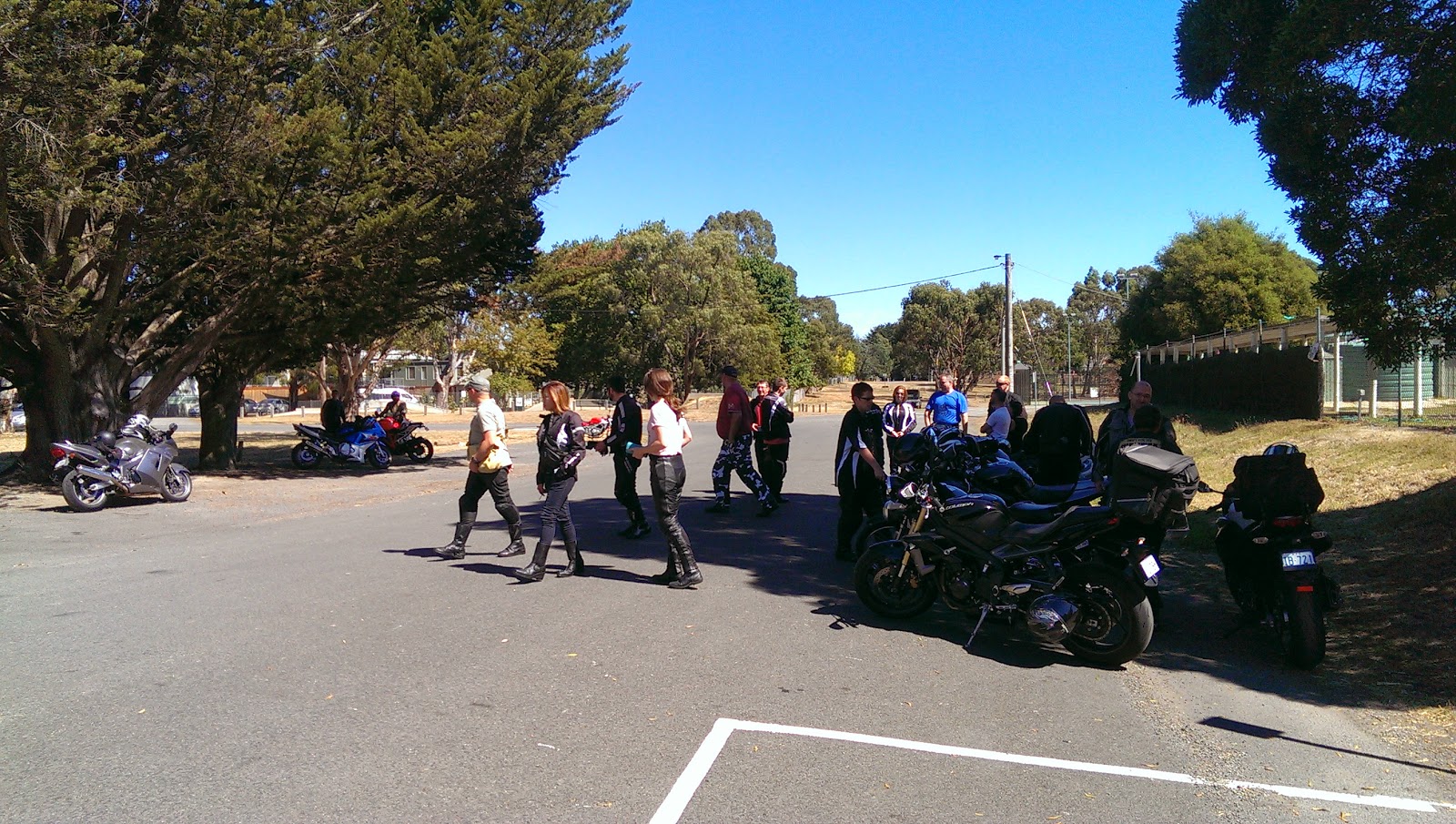 The first regroup at Woodend - take on some fuel, get some lunch, empty the bladder.....continue.....pretty standard issue.

Heading out of Woodend on the way into Daylesford, Hepburn Springs I am near the front of the bunch - Suddenly a frantic sequence of tail-lights flicker from the riders ahead......something's up.....they're all on the anchors......I immediately back off.

As I hit the crest I see the culprit - one very scared, very skittish, juvenile skippy (eastern grey Kangaroo for the international readers).......as EVERY Aussie rider knows, skippys are a dangerous prospect, not only are they a heavy and powerful animal, they also have ZERO road sense or spatial awareness, making them extremely unpredictable.....

This little fella crossed the road through the bunch no less than 3 times before finally somersaulting itself over a wire fence and back off into the bush. Poor little skippy - no Riders or Roos were harmed.

NB** This is not my footage or my bike - this footage belongs to a rider who participated in the Chocolate Run - original link here: youtube
This was the first pass the Roo made through the group, you can see it on the left as this rider avoids it. It was closer than it looks - trust me on that one.

Continuing out to the Chocolate Mill the ride played out as expected on our familiar route......we arrive, park the bikes and take a load off..... 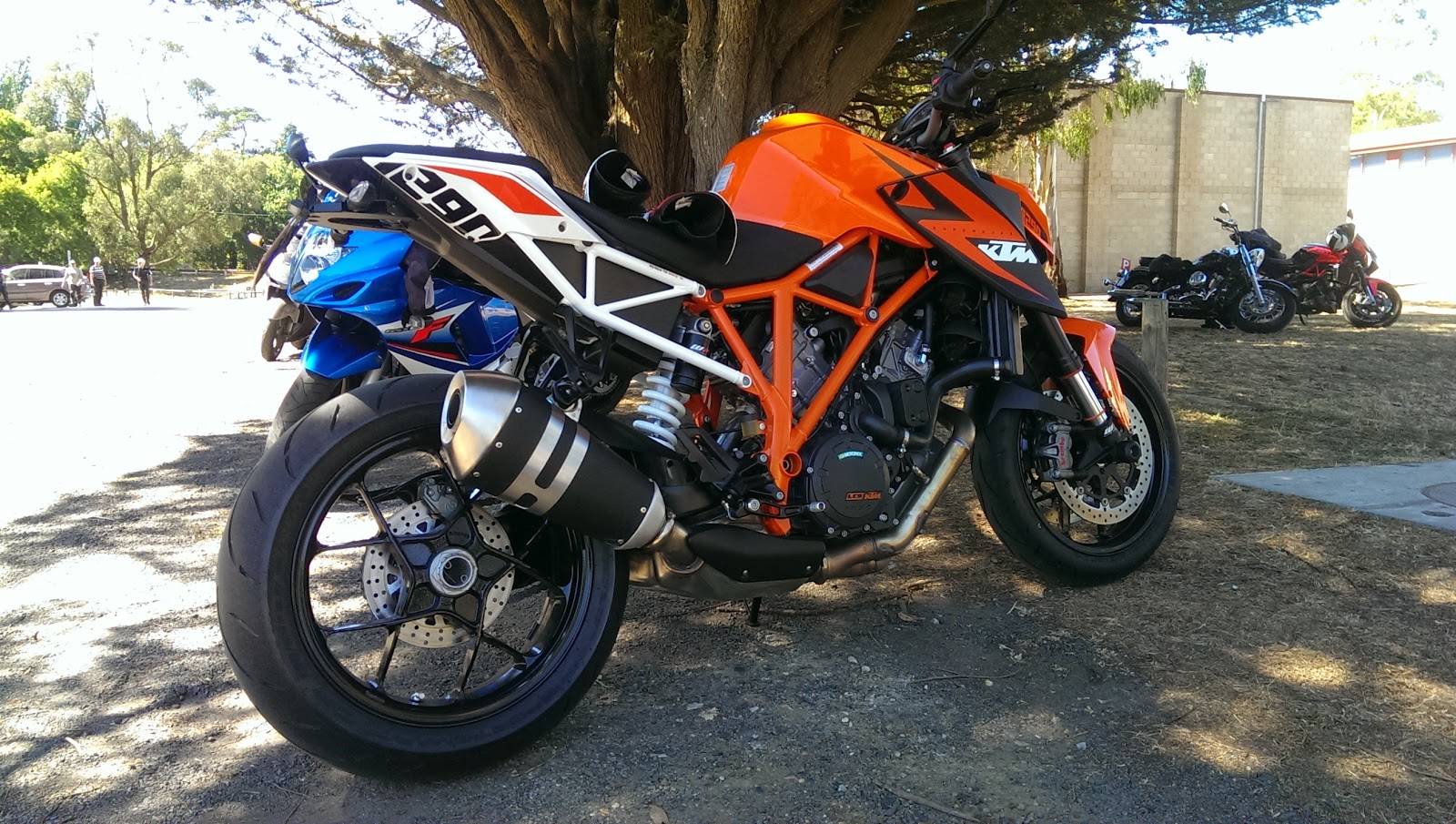 The Ape made an appearance 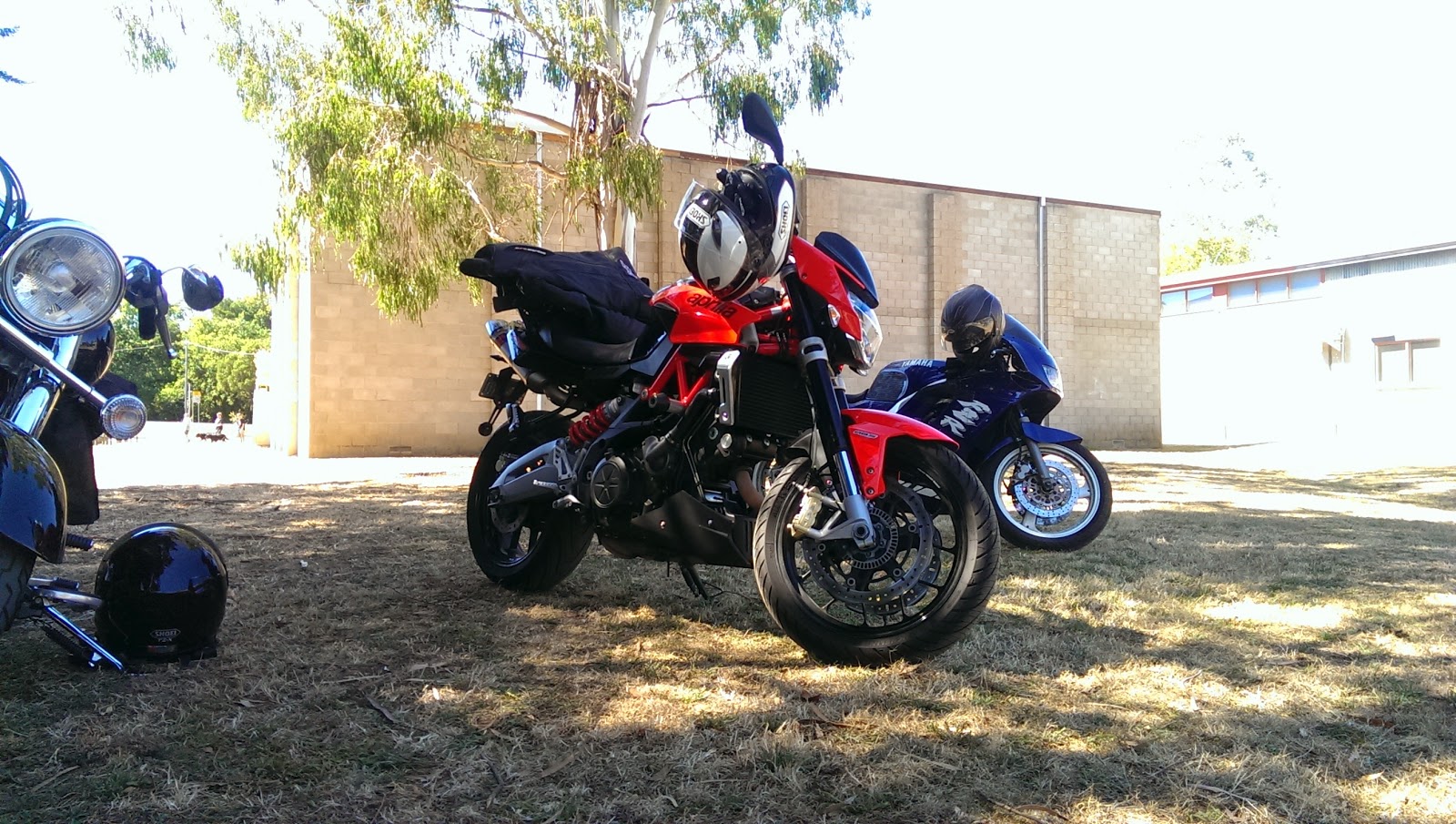 The bikes parked in the shade at the Chocolate Mill 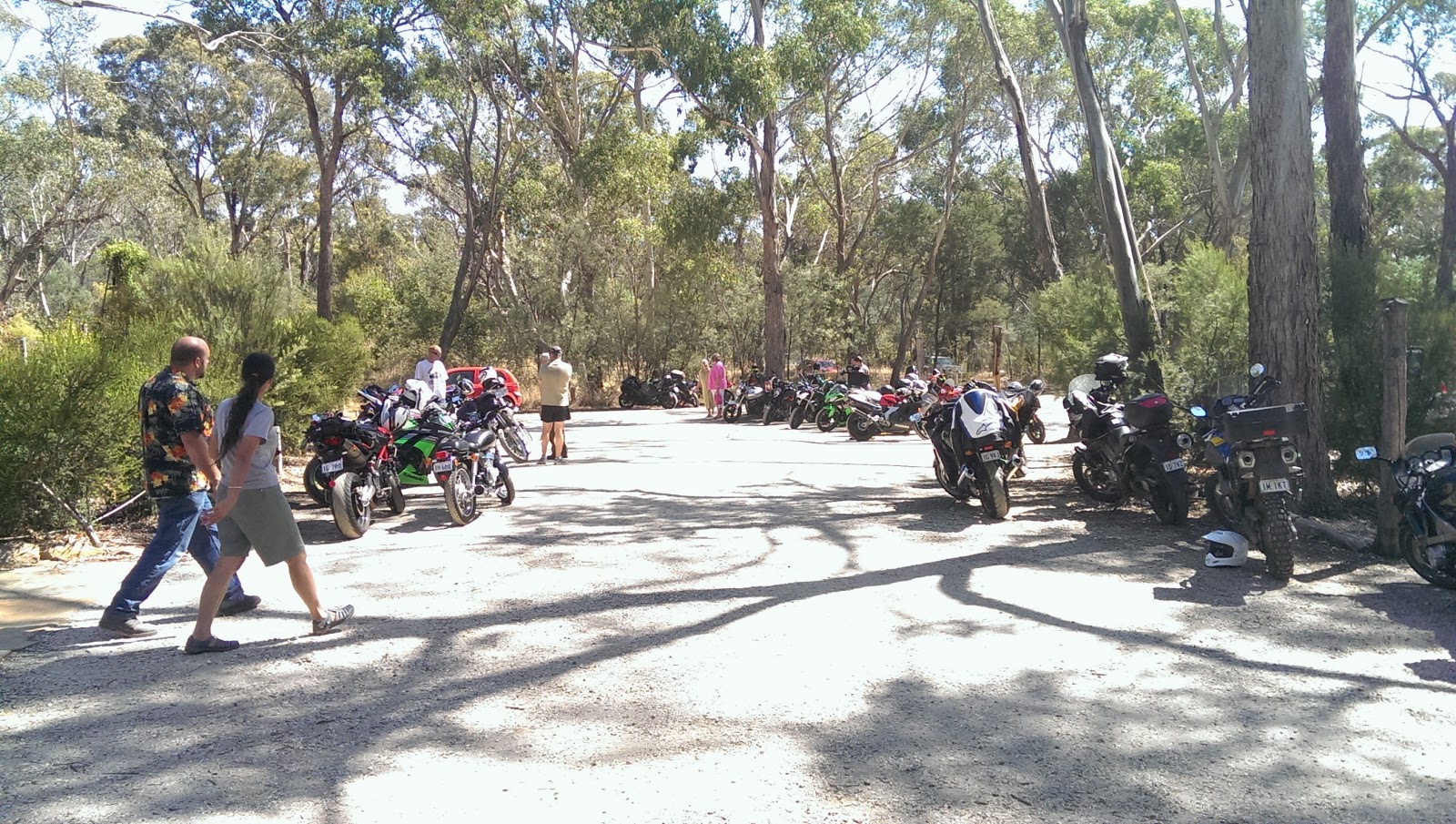 Another good run this year - we raised enough money for the soon to follow Black Dog Ride - but who needs and excuse eh?