I've ridden these roads in Summer and Winter with varying degrees of seasonal difficulty........I rode them this Saturday...........it was hard work.

Saturday was the first properly warm, dry day we've had in a while. A buddy and I decided to "Hit the Hills" out East - we should have waited a little longer for Winter to pass. 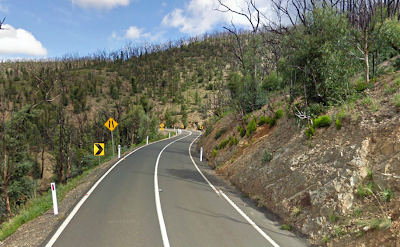 Coming into King Lake from Kangaroo Ground our spirits were high. The road was dry and clean - the air was a comfortable 23C, we hit the throttle with gusto, stringing together a lovely run into King Lake junction.

The burnt vegetation you see along the road is due to the intense Black Saturday fires of 2009, this area was hit hard and is still recovering.

From King Lake we headed through Healesville out to Marysville - this leg was again fun and fast - no problem with road condition. Usually we would stop to take some caffeine on board at the Marysville bakehouse, for some reason today we decided to push on. 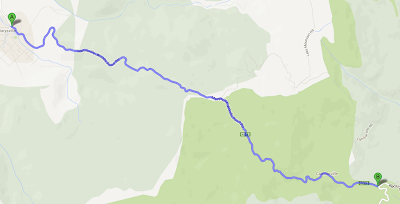 We took off over Lake Mountain in the general direction of the Reefton Spur.

As we continuing to climb into the Sub-Alpine region, the indicated temperature on the dash started to drop - eventually bottoming out at 11C. All of a sudden it felt very much like Winter again.

The road condition was becoming increasingly treacherous. Leaf litter, stringy bark, clay, loose gravel and potholes were the name of the game. Staying upright became a bit of a challenge. Both myself and my riding buddy had a few "moments".......we promptly decided to back off.

Unfortunately we were not clear of the bad conditions.

Reefton Spur was also covered in a loose top-layer of debris and detritus. The front end did not want to stay on line through corners and the rear was more than happy to spin up on nearly every exit.......this was fun for a while - it became not so fun pretty quickly.


By the time we reached Reefton Hotel we were more than happy to get off the bikes for a while, have a cold drink and sit in the sun - we were absolutely shagged.

I looked at my buddy and said - "mate, that was tough" - his face said it all. No. Reply. Required.

A couple of riders showed up who had come from the Warburton side - they asked how the Reefton was - we told them - they went back the way they came..........which lucky for us, was our way home.

\BitSar
--had a ball - just trying to stay upright.