Sitting at home on a warm summer night, bored, restless.

In the garage, locked away, the 'Night Brawler' seduces. Tick, tock...

I have limited time tonight for a quick session of social disobedience - notwithstanding the silly season and the increased VicPol presence, the draw of the MT-09 is too great.

Light is fading, the last sliver of sunlight has already retreated over the horizon - setting off on the night side of dusk I skip the coastal road and head directly for the docks of Melbourne. 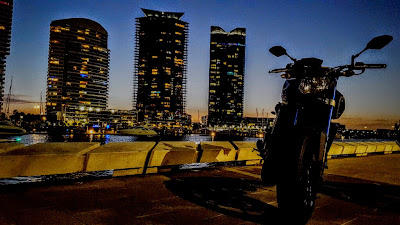 Well, more or less directly. Making way, the MT demands to be toyed with. Braarrp here, wheelie there.

I had put the word out to a few riding buddies before heading out, mischief likes company after all. 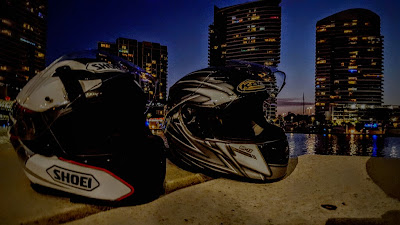 Unfortunately tonight, time is not on my side. Fortunately I had laid eyes on some interesting places and had wet the appetite for the final installment in the 'Night Brawler' series.

"See 'ya later brother - next time" we peel off and head our separate ways.

There is an innate camaraderie to motorcycling, it connects people like no other activity or pursuit I have ever been a part of. Perhaps it is due to the commitment it requires? The diligence? The obsession?